skip to main | skip to sidebar

Advantages of being big

I was paging through Siff's Supertraining and came across the chapter on the dependence of strength on body mass. There is an equation worked out by sport scientists that predict the total of powerlifting lifts. Inserting various bodyweights into the equation and plotting the results produces the graph below. 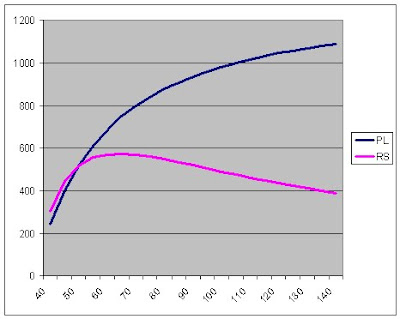 Dark blue line is the result of PL lifts, whereas RS is the relative strength (lifted max divided by bodymass, I multiplied it by 50 to get two lines onto the same graph).

Interesting. Big guys are stronger in the absolute sense. That is why in weightlifting in the highest weight categories you see so many big guys, thoughy many of them are frankly fat. By gaining mass by eating leads to increase in body mass, and some of these gains will be muscle. From my memory I can recall this trend being broken couple of times: by Yury Vlasov in the 60-s and more recently by Pisarenko in the 80-s. These guys were training more like bodybuilders in the sense that they were bulking by gaining muscle mass, not eating themselves up. But whatever the body composition, smaller guys will always be at a disadvantage in terms of how much they can lift compared to bigger guys.
And that is why gireviks in the lighter weight categories impress me so much: lifting one's bodyweight for ten minutes is quite different than lifting, say, two thirds of it for the same time.
Another interesting observation is how relative strength changes with bodyweight. It looks like it peaks between 60 and 70 kg and then declines. Does it mean that in this range of bodyweight you get most efficiency in terms of force production?
Posted by Smet 2 comments:

In stock traiding if you miss the stop and don't get out of the trade in time it becomes long-term investment. My timed set became interval session when I realized that I haven't recovered from 20 squats. It is not going well today and I am not going to push myself.

Not sure why my snatch deteriorated all of a sudden...

Not feeling strong at all. Will call it a day.
Posted by Smet No comments: